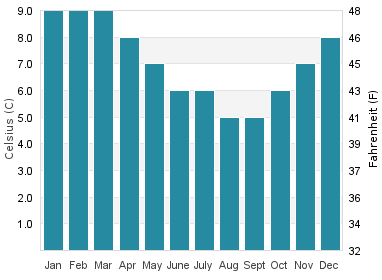 Puerto Williams lies between the 54° and 55° latitude in the southern hemisphere – comparable to the position of the Isle of Man, United Kingdom in the northern hemisphere.

Antarctica’s closeness and the omnipresent wind determine the wind-chill temperature throughout the year.

In Puerto Williams the average annual temperature is 5.6°C and 515mm of precipitation.

The influence of the low-pressure areas that travel over the region determines the weather, especially in the summer months.

The relatively warm summer months of December to March reach an average temperature of 14°C and peaks up to 15°/20°C.

Precipitation decreases during this season and the days become extremely long, up to 18 hours.

The pampa in the northeast of the island has a cold, windy desert climate.

The glaciated mountains and cold primeval forest in the southwest show frequent precipitation.

The south exhibits a predominant cold oceanic climate. Apart from the protected areas, this region is particularly exposed to the sometimes-violent westerly winds.

Since the southern tip of Tierra del Fuego is subject to frequent weather fluctuations, it is recommended to always check the weather forecast beforehand.